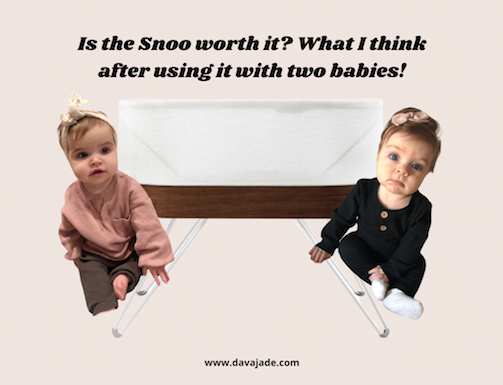 To answer the question of is it worth it – in my opinion, 1000% YES! If you can buy something that will help you get more sleep, why not get it?

I have now used it with both of my girls and can say I totally recommend it. My 2nd time around was a much easier and a better experience than my 1st, but I’ll fill you in about that.

So let’s get into it!

PRICE – When we brought Penelope home from the hospital my husband surprised me with the Snoo. I was so excited because I had been wanting it but we never got it because of the price. I’m pretty sure the price tag is the #1 thing that stops people from getting it, which is completely understandable. It’s an investment, but an investment for your baby’s sleep, your sleep, and your sanity. Since my husband is a veteran he found out he was able to get a discount on the Snoo. I think the discount for military is 20% off now (used to be more – such a bummer!), so if you or your partner is a veteran or active duty, get the code! They do sales ranging from 20 – 40% off a couple times a year, but I’m pretty sure their biggest sales happen around Thanksgiving. If you don’t want to pay full price, you can also look at Facebook Marketplace or Craigslist. I’ve seen them range anywhere from $700 – $1,000 there, and most of them are gently used. Another way you can look at the price tag of a new one, is after you have used it for your baby, you can turn around and sell it for almost what you paid for. The way my husband and I thought about it was, we’re going to be using it for at least two babies (maybe more :)) so we’ll definitely get over a year’s use out of it and still be able to sell it for close to what we paid. Another option to get the Snoo but not pay the price tag is to rent. Renting is $149/month. If I rented with Penelope we would have spent $694 based off of their $149 for months 1-4 and $49 for the two months after. With Goldie, we would have spent $645. Spending that much is almost the same price as purchasing a used Snoo. Whether you buy new, used, or rent, I think it’s a matter of figuring out some family planning and what is going to work for you and your family.

QUALITY – We’ve used our Snoo for a total of 11 months between both girls and it still looks brand new. I’ve had a couple of issues with the app and the wifi connection but besides that I have never had issues with it shutting off, or doing anything weird. The sleep sacks and sheets have all held up well and I don’t feel like I need to replace anything. It’s also a super cute, aesthetically pleasing, chic, bassinet. Who doesn’t love that? It has worked the same from the first day we used it with Penelope to the last day we used it with Goldie.

PEACE OF MIND – Beside the benefits of sleep, the Snoo gave me such peace of mind when my girls were sleeping in it. I also love that the app will send you notifications to tend to the baby if it is not able to rock them back to sleep. I knew they were sleeping in a safe sleep environment and couldn’t roll over while they were swaddled. I never worried about their face being squished against the bassinet or waking up to her swaddle being unraveled. As a mom, especially a first time mom, you are constantly worrying about everything, so having the peace of mind that your baby is safe while they sleep is EVERYTHING!

Penelope & The Snoo – With Penelope, I feel like it was all trial and error. She taught me so much when it comes to babies and sleep. Penelope was having 9 hour stretches by the time she was 2 months. We were doing so good until we hit the 4 month sleep regression. After adjusting a couple things we got her back on track and moved her to her crib at 6 months and I did formal sleep training to get rid of that last night’s waking. It didn’t take long though thanks to Taking Cara Babies. Overall, I think that the Snoo totally helped with Penelope’s foundation of sleep. I remember putting her down for bed one night when we had friends over and walking out of the room and someone said to me, “That’s it? You just put her in it and close the door?”, Yep! 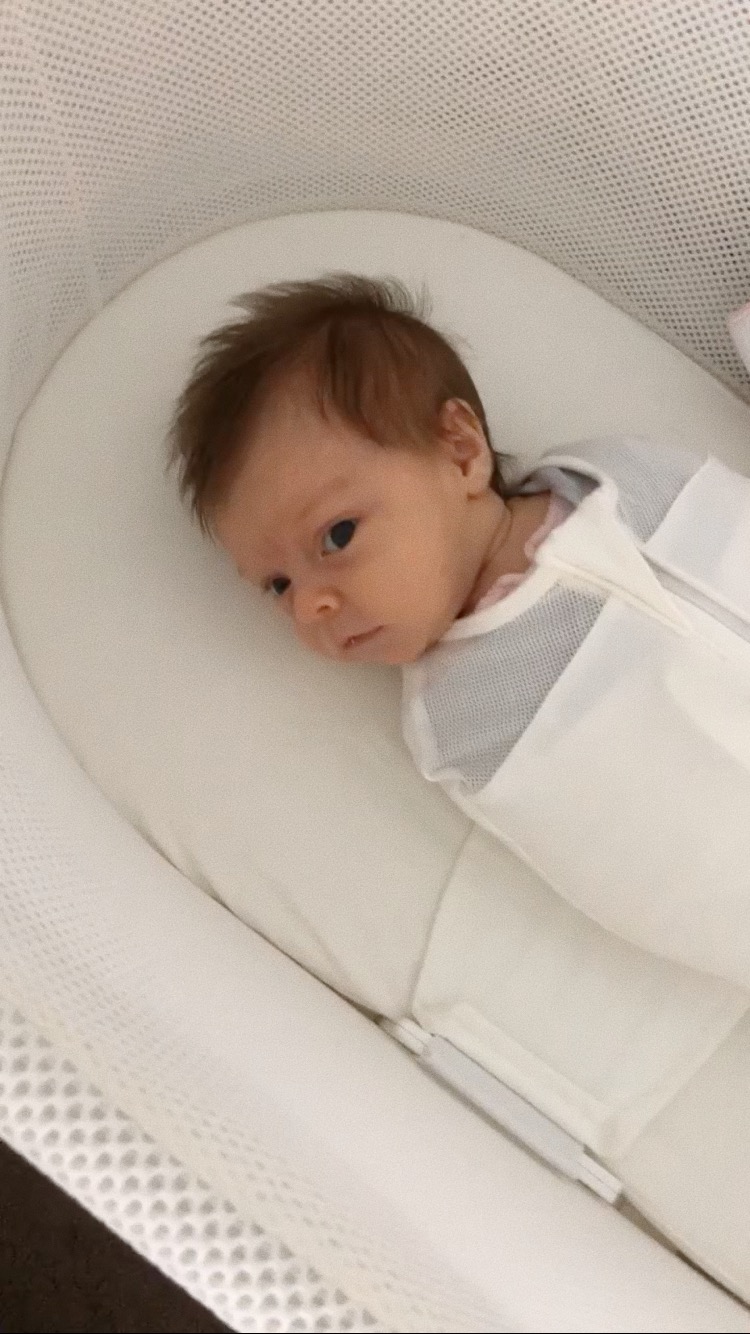 Goldie & The Snoo – With Goldie, I did everything I wish I would have done from the start with Penelope and voila – she was sleeping through the night 7:30pm -7:30 am by 9 weeks old. By the time she was two weeks old I was only waking up once in the middle of the night with her. That middle of the night waking gradually went from 2 am to 3 am and so on. The Snoo did what it is suppose to do and helped her stretch her sleep and connect her sleep cycles. One day I woke up in a panic at 7 am thinking I had missed something and there she was sound asleep. I checked the app to double check and it showed that she was sleeping the entire night. From that night on, she has consistently been sleeping through the night. No cry it out method, zero crying involved, no “formal” sleep training, and her transition to the crib went without a hiccup. Just the Snoo and some other sleep tips I incorporated from the start. 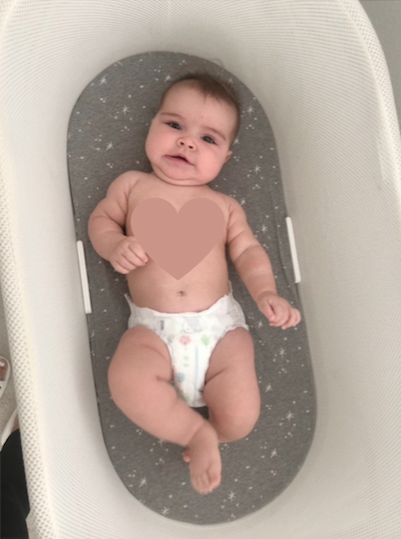 Goldie’s last day of using the Snoo… I took this pic just to remember how big she was when we transitioned.

TIPS – One thing that I didn’t know about and I wish I had taken more advantage of with Penelope was the Snoo customer service. When you purchase or rent a Snoo, you have access to their sleep consultants. They have awesome customer service and can help guide you with your Snoo. Amazing!! Two things that I do in addition to what the Snoo comes with is a second swaddle and a sound machine. Using a very light cotton swaddle I would swaddle my girls and then place them in the Snoo swaddle. This made sure that they were snug and their little hands couldn’t escape. The second thing I do is use a Hatch sound machine. The Snoo already has a white noise sound that changes with each level, however I felt as though it wasn’t loud enough when it was on the lowest level. I used the Hatch around 20-30% and it was perfect. There are also Snoo Facebook groups that you can join where people share their tips and tricks.

I hope I covered it all, but I’m always happy to share more about my experience using the Snoo so feel free to reach out!

You may also enjoy: